You’ve selected your one and only. The moment’s arrived to bring him home! Unless it’s a neighbourhood litter, I’ll assume you came by car. Now depending on the situation, the car ride can be quite an experience, so let me prepare you. Worst case scenario: your new dog gets car sick. It’s a sorry sight, although there are a few precautions you can take:

You may butt heads with some other nervous behaviors, such as whining, barking at passing objects, or eliminating. Stay calm. Don’t correct your dog; it’s a bad start and will only make him more anxious and homesick. Expect the worst, so no matter what happens, you’ll be prepared.

You’ve made it, somehow! All the anticipation has come to this very moment. The excitement level is probably up there, so take a few deep breaths. Too much tension can startle an older dog and may frighten a young puppy.

I know you want to rush in and give your newest member the full tour, but hold your huskies! Remember dogs don’t see their environment, they sniff it. Sniffing out an entire home might take hours and would be overwhelming. It’s better to pick one room ahead of time, clean it, decorate it with dishes and bedding, and take the new pup or dog there initially.

Share his curiosity as he checks out the room and speaks to him sweetly. If your dog has an accident or grabs something inappropriate, don’t correct him. He’s too disoriented to retain anything so soon and you’ll just frighten him. Relax! You’re doing fine. This is just the beginning!

Are some of you wondering what you should do with the rest of your household? If you have some anticipating eyes waiting for you at home, the next few suggestions can help.

Talk about excitement. This day may be on a future “fondest memories of my childhood” list. However, it’s your job to keep the kids calm. Too much squealing and loving in the first five minutes can be somewhat overwhelming for a pup.

Explain the situation ahead of time and ask your children to help you make the dog or puppy feel comfortable. The rule is that they can follow quietly and speak gently, but all roughhousing, shouting, and fighting amongst themselves is forbidden. This may be your last peaceful moment for a while, so enjoy it!

Have a pow-wow! Gather everyone together and create a large circle by spreading your legs so your feet touch. Place the dog in the centre of the circle and let him approach each person on his own. Discourage all unfair attention-getting ploys!

Don’t overstimulate your new pal with 300 toys and millions of people. If he is enthusiastic and wants to explore everything, go with him. If he wants to sit in a corner all day, just mill around the room, petting him as a reward for venturing out. Don’t pet him if he’s cowering in a corner—you’ll reinforce that behavior. If you pay attention to a timid dog, you’ll have a timid dog

Your friends will be the hardest creatures to control. They’ll all have ideas on the best way to raise a pup. First this suggestion: don’t follow your friends’ advice. No offence, but what works for one person and his dog probably won’t work for you and if you follow everyone’s suggestions, you may aggravate your puppy. If you need help, seek out a professional.

Now for those guests—encourage the company to get on the floor or sit in a low chair once your dog has calmed down. Bring your new arrival over and cradle him in a sitting position. If he’s too excited, offer him a special bone to help him calm down. By ignoring him when he’s excited and petting him when he’s calm, you’re getting a head start on encouraging good manners.

Let your common sense take over. If your dog is going to be around someone who’s physically challenged, don’t start off introductions by lifting the dog up to the person’s face or putting a young puppy in his lap. Oh sure, your puppy may be small now, but what will happen when he grows into a 130-pound Great Dane and still wants to sit in Grandma’s lap? Better teach that puppy to sit down next to the person and chew a special toy, one he only gets when visiting this person.

Don’t expect your resident pets to be wearing party hats when you pull into the driveway. In all likelihood, they won’t share your enthusiasm for the new family member.

Don’t expect an older dog to jump with joy at the prospect of sharing his space with your new arrival. The concept may take some getting used to. It’s best to make the first introductions on neutral ground before bringing them together in your home. You’ll probably see a lot of bluffing when the two first meet.

Don’t interfere unless you see an unusually aggressive response—glaring eyes, withdrawn lips, and a growl that starts in the throat or belly. Some older dogs will growl or paw at a new puppy—this is a good sign. Big dog is showing little dog who’s boss. Sometimes new dogs shriek if the resident dog even comes near; again, don’t interfere!

If you comfort the new dog, it may alienate your resident dog and make the relationship between them rocky. To keep the hierarchy harmonious, pay more attention to your resident dog, greeting and feeding him first. As long as he feels like he’s still number one in your heart, he should cope just fine. It’s hard not to meddle and feel protective of your newcomer, but remember, these are dog pack rules!

Cats and dogs can get along.

Cats have mixed feelings about new dogs. Some cats head for the highest object in the house and stare at you reproachfully. Some wait confidently for the curious dog to get close enough for a good, solid bat on the nose.

In either case, keep your response low-key. Overreacting will make both of them nervous. If your cat can’t come to grips with the idea, keep them in separate areas and bring them together when your dog is experienced with the Teaching Lead.

If there are other caged animals in the house, like ferrets or guinea pigs, don’t bring them out immediately. Let the dog get used to you and then show him the cages when he’s in a sleepy mood.

Bluffing, canine-style, can be recognized by showing teeth, raised hackles, and shoulder pawing. It all looks pretty scary, but rarely surfaces to a fight, so stay calm and don’t interfere. 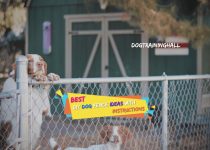 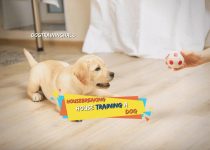 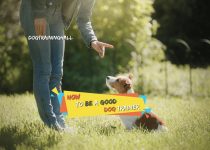