If your dog thinks of you as another dog and you start yelling, what does he hear? Yes, he hears barking. And would barking calm excitement or increase it? Right again, it would increase it. Now some of you may have a dog that backs off from a situation when you yell, though he’ll probably repeat the same behavior later. That’s because yelling frightened him.

He backed off because he was afraid of you, not because he understood. Yelling at any angle is just no good. So what works? Well, we’ll get there in just a few moments, but before we begin, there are three tones you should commit to memory. I call them the three Ds:

Your praise tone should soothe your dog, not excite him. Find a tone that makes him feel warm and proud inside.

Use this tone for your commands. It should be clear and authoritative, not harsh or sweet. Give your commands once from the peacock position.

I’m not much of a disciplinarian. My approach encourages more structure than strictness, but you should have a few tones that tell your dog to back off or move on. I use “Ep-Ep” a lot. I’ll go into more detail later, but the word doesn’t matter as much as the tone. The tone should be shameful or disapproving, like “How could you” or “You better not touch that…” Discipline has more to do with timing and tone than your dog’s transgressions.

As you can see, Doglish is quite different from English. Many people assume that their dog understands them when, in fact, he’s often picking up the opposite message. If you chase your table snatcher, your English is saying, “How dare you,” but your Doglish is saying, “PARTY!” Remember, every interaction you have with your dog gets translated in Doglish. From now on, you’re being watched from a canine’s eyes, so you had better start acting like one!

If you bend over when giving your dog a command, don’t be surprised if he doesn’t listen. You’re doing the doggy equivalent of a play bow (a posture that invites a game). To put it in human terms, if you asked me to have a seat while you were hunched over looking at the floor, I’d think less of where to sit and wonder what on earth you were looking at. Stand tall and proud like a peacock when giving your dog directions. Do you have kids? Since they’ll copy you, they over-enunciated all of your commands so they’ll learn to pronounce them properly. For example, instead of saying, “Sit,” say “SIIIT.” When your kids copy your intonations, the control will transfer from you to them! Don’t repeat your commands. Dogs don’t understand words as words; they learn to respond to specific tones and syllables. If you say “Sit, sit, sit, Boomer sit!” that’s what Boomer will learn. If you want your dog to listen when you give the first command, make sure you give it only once and reinforce your expectations by positioning your dog. 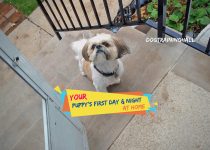 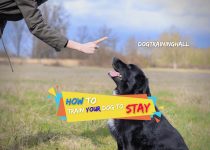